Hello everyone! I have been quite busy at my laboratory so i only have the chance to write this right now.

Last saturday and sunday (27-28 October 2012) i had a chance to follow a short homestay program (that is held by International Student Center Tokodai and Hippo Family Club). In the reception, Satou Sensei that this homestay program for YSEP student has been held for 12 years. And i quite agree with her that this program is one of the fundamental pillar of YSEP, because we surely will get to know so many thing about Japanese Daily Life from this program.

I stayed at Kaihori family’s house and they are really wonderful.They live at an apartment at Ota-city, near Kamata Station.  Their family consist of father, mother, and 3 children (1 girl and 2 boys)

お母さん Eiko Kaihori is a nurse and house wife. She speaks english well and also some Indonesian basic phrase, wonderful! She had ever been to Jakarta and Bali and she loves Mango fruit in Indonesia so much. She has a really nice singing voice and she’s good at piano as well. She’s such a nurturing and loving mother 🙂

御父さん Takafumi Kaihori works at JGC Corporation, dealing with financial and management thing. He had ever stayed in Indonesia for 2 years (in Indramayu, building an energy plant there) so he still remember some Indonesian Language and culture, his hobby is golf. He’s such a cheerful father 🙂 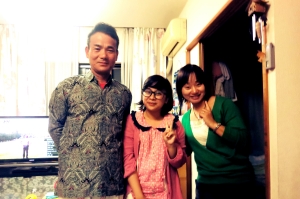 Me, Otousan, and Okaasan 🙂 Otousan wear a batik!

妹 Shiho Kaihori is15 years old and she’s a 3rd grade Junior High School Student. Her hobby is badminton and she’s such a cute, pretty, and stylish girl. I hope that someday i will have the chance to go shopping with her to Harajuku! Next summer she will spend 10 months as exchange student at America, she must be very witty too! 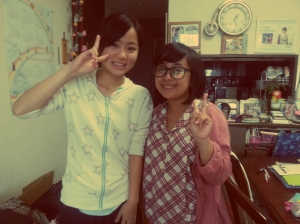 first 弟 Yoshimichi Kaihori is 13 years old. I haven’t spoken much to him because he was busy with school festival when i was there. and second 弟 Sohya Kaihori is 9 years old. He is very funny and friendly, we managed to play and having so much fun together although he know very little english phrase (and so do I, i know very little japanese phrase). His hobby is baseball and he’s already in a junior team.

When i first arrived at the house although it was an apartment i am really amazed that it still have the traditional Japanese house decoration. From tatami, futon, until the japanese sliding door (障子）when i first arrived i played Kanji Flash Card Game with Okaasan while listening to Hippo Family Club multilingual CD. And after that we made dinner to be taken to Hippo Family Club Regional Meeting and also i had chat with the family (i talked a lot with Otousan about Indonesia).

Some of the example room in the house 🙂

After that me, Okaasan, Sohya-kun, and Shiho-chan went to Hippo Family Club Regional Meeting. We played games and eat a lot and have fun. There were another 3 homestay participant which is Asri my friend from Indonesia, ZJ from China, and Danielle from Italy. 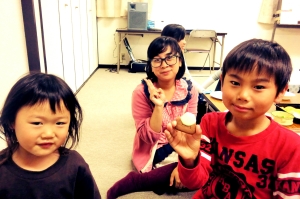 And i also have the special chance to play violin together with Risa-chan, one of the daughter of Hippo Family Club Member. She will study music at Austria next year, although she’s only 12, i bet she will be a very good violinist in the future! We played Rasa Sayange (yes, it’s Indonesian song^^) and Twinkle-Twinkle Little Star. I tried to make the performance more beautiful by making harmony of the melody instead of playing the same melody with Risa-chan.

Me and Risa-chan playing violin together 🙂

After that we went home and Okaasan read me an illustrated book (a Japanese classic story) named Sobasei and Inu no Me. The book was so funny and it also had very good illustration inside it. And i had the chance to sleep at futon, and it was all on pink!

The next morning, i helped Okaasan to prepare breakfast. She taught me how to make Japanese Style Rolled Egg and Grilled Salmon also Miso Shiru. She said that this breakfast is a typical Japanese breakfast. and you know what, it tastes really delicious! What a bit surprising for me is that it use so little seasoning but it can taste so good (for example the Grilled salmon only used salt on it)

After that Okaasan taught me to do Origami, i was taught to make crane and flower, but it was so difficult. After the origami finished we go to the baseball court to watch Sohya’s game, unfortunately he lost 😦 but i bet he would be a very good baseball player someday! Ganbatte, little brother!

And we came back again to the house for one last farewell with the rest of the family. Okaasan played some Japanese song on piano for me (M from Princess Princess and Arigatou from Ikimono Gakari, i really love them both). And i played Indonesian Song called Seputih Melati (as white as Melati, Melati is an Indonesian flower with white color). I also taught Okaasan how to play violin a bit! She already has the sense to play it! 😀

The last thing that we did is a joint dinner with Danielle and his host family at a very nice Soba Restaurant. I ate Hot Tempura Soba (for me the idea of eating cold soba is still unbelievable) and we ate Baskin Robbin for Dessert, i order a very cute ice cream that is shaped like Panda! 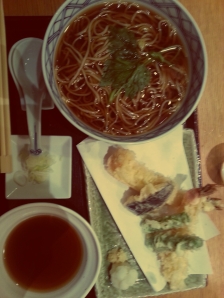 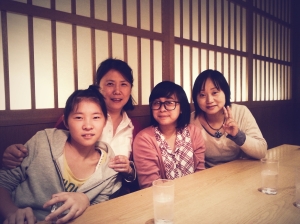 The Lunch at Soba Restaurant 🙂

And that was all for my homestay, short but very intimate, warm, and meaningful. Thank you so much Hippo Family Club and Kaihori Family! and not forget to mention this wonderful plaque i got from them, arigatou :’)