Finally i can write again. Well since weeks before it was chaos (hectic experiment at the lab, progress report, several final reports, and Japanese language examination) i did not have the chance to write anything at this blog.

But now everything has loosen up a bit. I have finished all of my final reports, examination, and my laboratory work is not as hectic as several weeks ago. Well, i still have to come everyday, but basically i didn’t do as much. And i’m also currently waiting for my mutagenesis kit to arrive, so i can only practice Polymerase Chain Reaction, and do some validation on my screening methods.

Anyway i want to talk about the snow! Actually, i know that this topic is already outdated. Since the time when Tokyo was snowing heavily was about 2 weeks ago, but whatever, i just want to write about it :p

So, at 15th of January 2013, Tokyo experienced a heavy snowfall. It was public holiday, Coming of The Age Day (The day when youth that has passed 20 years old is considered fully an adult). At first i thought it would be just raining (because Weather Channel said so) but approximately at 10 AM it began to snow. Usually Tokyo doesn’t experienced such a heavy snowfall, so i just thought casually that the snow would stop immediately and would not pile up much and no problem would be caused.

It was so beautiful to saw the snow began!to pilled up on my dormitory’s backyard. And i was so thrilled! 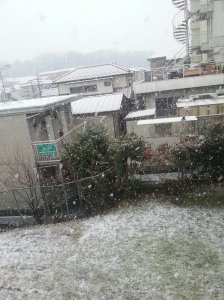 As I also had to go out because i had already made an appointment with my friend and my bacteria still need care at the lab,  i really had to get out. And i realized that time the snow had pilled up quite much and the wind was blowing quite hard. Maybe i was really sucks, but i found it quite hard to walk on top of the snow and i hate that the wind made the snow fall almost horizontally not vertically. So i did not know which part of me should i protect first, my head (because at that time i did not wear a hat) or my body and bag. Feeling helpless with that situation, I decided to took a bus to Aobadai Station ^^ 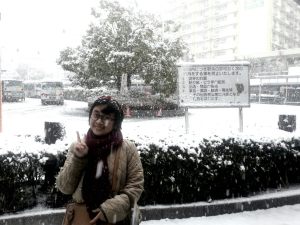 So i accompanied my friend to buy the present and i also bought myself a hat at passage mignon to protect my head because after this i still had to venture to the lab.

By the time i reached Suzukakedai Station i thought the snow fall had changed into blizzard. The wind was so strong and it was really really cold. At least in my opinion, i considered the snow was very thic. It was as high as my ankle and that time  was only wearing an ankle boots. So you know how i felt, the inside of my boots became wet and it was really cold, i felt numb >.<

and i really had to struggle to reach my laboratory. It even became more difficult with Suzukakedai Campus topography. Hill and slopes and stairs everywhere >.<

the view from my lab building, Suzukakedai Campus had became a snowy hill!!!

After doing my bacteria cultivation, i rushed to get back home after receiving message from my room mate that there was some problem with our air conditioner. But going back home was much more difficult than i thought. The wind became stronger and stronger. My hat flew 3 times, my umbrella 2 times, and i also fell one time 😛

By the time i reached Fujigaoka Station, the snow there had changed into rain and the snow pilling up has melt a bit. So it became much more slippery to walk on >.< I did not know how, i finally reached my dormitory again.

At night, my parent called to my mobile phone, not my skype, so i thought there was something urgent. In fact they were talking about this snow and asking whether i’m alright or not and will the school be closed or not. I was quite surprised for this, but apparently those questions appeared because this snow was very heavy (for Tokyo) and really unusual. Some news said that this snow was the heaviest snow at Tokyo during this past 7 years. In my place train was delayed, but it is said that in other place Train was stopped, flight was cancelled, and hundreds of people got injured due to the snow ( i guess they’re falling ) and one man had died due to riding a bike on top of the icy road (scary) ^^

So thanks God, although i was out during the most windy and snowy time, i’m still alive and well! 🙂

But for me, the worst part was the next morning. The snow had became an ice, and it was extremely slippery. No one had clean the road yet nor the pedestrian walkway. And i really wish i didn’t have to go to the lab, do my progress presentation, attend lectures and special lectures that day!!

Actually this is not my first experience of heavy snowfall. I had experienced once at January 2013 at Beijing, China. On the night when my plane landed at Beijing Airport, a heavy snow fall had just finished falling. And the temperature plummet until -16 degree. Even inside the airport it was freezing cold. But the next morning, everything had came back to normal, snow covering walkways had been clean up and there was no big problem.

only my Dad had the courage of not wearing gloves >.<

The Bird Nest Stadium and Snow!

In the next morning even I went to The Great Wall of China although it was freezing cold, there were no slippery walkways because everything had been neatly cleaned up.

Great Wall of China and my alien little brother hahaha ^^

In this way, i think Beijing had a better preparation to deal with snow than Tokyo and Yokohama, but i think no one can blame Tokyo and Yokohama government for this. Because we all know that Tokyo rarely experience heavy snow, and Beijing always experience that every year.

But it was such a pity that Tokyo, as a very modern and metropolitan city could be paralyzed because of the snow :’)

However, next week i’m gonna go skiing with my laboratory mates and sensei 🙂 So i will meet more snow! Hope this time i can walk properly and also (miraculously) i could manage to play ski and have fun! (because you know i’m really flunking sport as well as balance)

Have a nice weekend all, let it snow again! 🙂