I’m happily reporting from my dormitory room, safe and sound and healthy with no injuries (beside minor bruises and common delayed onset muscle soreness) after… a SKI TRIP!

So, my wonderful laboratory 松田研究室 had just went to a ski trip to Naeba Ski Resort this thursday and friday (7-8 February 2013). Actually, i’ve heard some scary stories about ski and just for your information i am really absolutely not a sporty type of girl (in fact i am always flunking every sport and i have a lame strength, agility, dexterity, and anything you can named related to outdoor’s activity). But whatever, i’m at Japan, they have snow, my sensei agreed to teach me, my lab mates are very nice and they would not let me down, so i decided to follow this ski trip!

Naeba is a mountainous area around Niigata Prefecture and Nagano Prefecture, in winter it is famous for its ski area. It’s quite close from Tokyo and by Shinkansen we can reach it only in 1,5 hour. Rice and water in Naeba is said to be one of the best so the omiyage from this area is mainly sake (rice wine).

So we departed at 6.32 from Tokyo Station using Tanigawa Shinkansen to Echigoyuzawa Station. There were me,  Masuda-san, Kawaguchi-san, Matsuda Sensei, Cao-san, and Sugiyama-san. Later on at Omiya Station, Yamamoto-san also joined.

Actually, it was pretty much a struggle to get to Tokyo Station by 6.10. I had to walk from my dormitory from 4.50 to catch 5.10 train. But, i made it on time and we all ate breakfast on the train.

It only took 1,5 hour to reached Echigoyuzawa Station, the nearest station to the ski area. Just before we reached the station from the train’s window i could already see snow everywhere. Yes, it snowed the night before and everything were covered on a beautiful thick white blanket :’) When we reached the station it was really cold but the sun was shining very brightly. It was my first time to wear such a full gear winter clothing, from ear muffs, scarfs, until gloves :p at Tokyo it was never that cold.

After we arrived at the station, we took a shuttle bus to Naeba Ski Resort. We gonna spent this ski trip at Naeba Prince Hotel and Ski Resort. So this gigantic resort hotel with 4 buildings connected to each other is located just in front of the スキじょう. And you have everything ready there, from ski gear rental area, ski school, ski gear shops, plenty of restaurants, two onsen (Japanese Public Bath, and one of it has an open air area), souvenir shops, and European styled room.

Once we have arrived at the hotel we immediately rent the ski gear. From ski shoes, ski board and poles, ski wear, and goggles. We also had to wear woll hat and gloves. For the inside, we wore heat tech and sweater. I found out that the ski shoes is really the heaviest shoes i ever wear, ice-skating shoes is nothing compared to this heavy shoes.

When i have fully dressed up with ski gear i had this uncomfortable feeling because only walking around with this heavy layered clothes and shoes is already tiring for me. Can i really do ski?

But anyway,  i have no point of turning back.

We went out and wow, i was really astonished! The view was amazing. And it was really bright the sun shines shined brightly and the white snow reflect the lights so much. So that’s why we have to wear goggle. 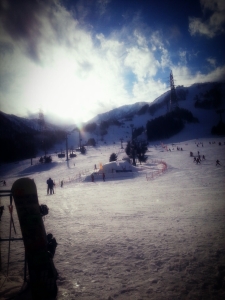 The next thing i had to face is… the ski board which is really heavy (okay maybe this is a bit exaggerating but at least for me it is heavy) and even putting on the ski board to the ski shoes is difficult for me. And the degree of difficulty increased very much to walk with ski shoes and ski board. Now it was not only heavy but also slippery! 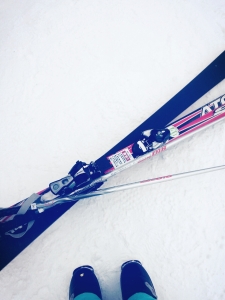 Anyway my friends and sensei took me to the lift and it brought me uphill. And my sensei also convinced me that it would be alright. The view was astonishing from the ski lift but i was also a bit frightened to see the elevation of the hill, it was really steep for me. And, just like i have imagined, once i tried to ski down, i could not stop and once i fell down it was really hard for me to get up 😦

(the truth was everyone has to drag and pull me up everytime to get up >.< and sometimes because sensei was holding me tightly when i fall she also fall with me, i really really really feel bad for this, ごめなさい せんせい 😥 )

So, what i learned today? I learned how to get up. So when you fall and you still have your ski on you. At first you have to bring your ski together to one side and use your pole to help you stand up. Just like this picture.

But since i was really terrible, and keep falling all over again, i went down the hill eventually by walking and even on that time walking was also difficult due to the steepness of the hill. And that was how my first ski day end. Bruises on my both hip and muscle pain everywhere. But at least after that we had a good rest by soaking ourselves at hot onsen, fulfilling our stomach with good Chinese dishes, and sleep for a long time 😀

The second day, snow was falling quite hard, but everyone decided to keep on skiing. It was really cold. And sensei took me to practice downhill because she was afraid of losing me in this little snow blizzard. So she taught me how to stop properly. I think this is the most important aspect of skiing, how to stop. Because actually when you are skiing downhill you will just move and even gaining speed, so you have to be able to stop, in case you gain speed to much, or someone is in front of you or a tree is in front of you.

And when i checked on the internet just now, actually she was teaching me how to do snowplough turn, a beginner technique. So when you are skiing downhill you have to make your ski parallel to each other and push with your pole. To stop, you have to bring the front of your skis together and the tails pushed wide away. Your knees should be put together also and you have to rolled it inward.

Well after sensei and my friends decided that i’m (a bit) ready to go, they decide to bring me uphill, this time to an easier course. But still i flunk and cannot stop. So Masuda-san was in couple meter in front of me and i had to ski to her and stop just before i hit her. But that was useless, since i cannot stop and i crash to her 😦 Me and Masuda-san were just screaming, とめない！！！ all the time X)) and when i crash to Masuda san and we both fall or get entangled to each other and slipping downhill slowly, but at that time Kawaguchi-san was always there to help us! so thanks a lot Kawaguchi-san 😀

After lunch everyone brought me uphill again and this time during steep slope i hold on to sensei’s back while she skii downhill. I really appreciated her dedication to teach me and it really reminds me of how my Mom used to teach me swimming. And anyway, i’m really thankful to her and i bet she could be a real ski instructor :’) And during not so steep slope i tried to ski downhill by myself. 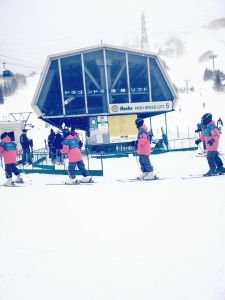 Me and ski, anyway this ski wear is cute, isn’t it? At least i’ve managed to look feminine enough :p

At last when i got better i tried to ski downhill and slide for a longer time. But this was a nightmare because i could not stop. There were poles on the right side of the road and i had been trying with all of my power to turn left but i still could not. And i crash to a pole and i fell and i stop. I could only laugh and i decided to stop skiing, and anyway it was already 3 PM and we had to leave hotel by 5 PM. And i ended that day by having a bath again at onsen, and this time was the open air one. And it was really wonderful to feel the hot water altogether with snow falling on your hair :’) I bought omiyage for my friends and we went back to station to take the Shinkansen for Tokyo 🙂

Anyway, that was my first ski experience (and probably the last), quite fun, wondrous sceneries but hellish tiring and a bit frightening. I could only conclude that i am really not the type of girl for skiing 😀 and also, i advice you if you want to go ski, do exercise at least one month before it. Because you will use all of your body and for me the muscle pain last 2 days and it was not pleasant, at all :p

And also i would really say thank you to my sensei, Matsuda Sensei for the patience when teaching me, and my laboratory friends. Masuda-san for the kind teaching and also lending me some ski gear, Kawaguchi-san for getting me and Masuda-san out of trouble, Yamamoto-san, Cao-san, and Sugiyama-san for helping me, dragging, and pulling me up. Thank you マツケン without you all i will not feel this life time experience! :’)