So, actually I spent only one week at Japan during the spring holiday. I’ve just came back to Japan by 2nd of April and during that last week of spring holiday (2-6 April) I spent it together with my sister, Mbak Allya. And we went to some places around Japan 😀 It was my first experience to have trip with my sister only 😀 And we really had fun!

We landed at Narita with different flight and we went directly to my dormitory. From Narita airport we took Keisei Bus which depart every 30 minutes or so to Tama Plaza Station, that bus cost 2800 Yen, and it took about 2 hours to reach Tama Plaza Station. We were starving and decided to eat at Tama Plaza Terrace and our choice came to Ojori, a Korean Restaurant (seems like we landed in a wrong country XD)

Anyway this restaurant was nice because the delicious lunch set (consist of vegetables entree, Korean Soup, and some mixed rice but not Bibimbap) only costs about 1000-2000 Yen but it would be in a huge portion (at least in our opinion).

From Tama Plaza Station we decided to take taxi to Umegaoka dormitory (because we brought two suitcases and it was raining). After cleaning up ourselves we were getting ready for our next trip. Yes, we were going to ride a night bus to Osaka! But since our bus would only depart at 22.45, after storing our little suitcase and backpack inside coin locker at Shinjuku Station, we spent time at Shibuya and Harajuku. 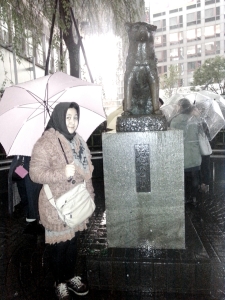 Mbak Allya and The Hachiko Statue 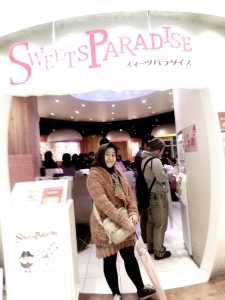 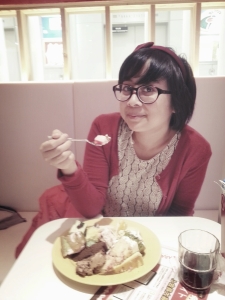 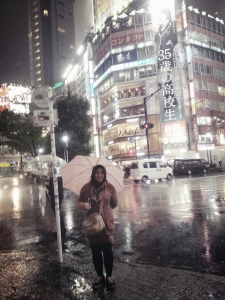 We reached Shijuku again by 21.15 and we planned to search for the departing place. We took Willer Express (because i think that’s the only night bus corporation that has its website in English) and we thought it would be a reliable ride. So it is said on the e-mail that the waiting place was at Shinjuku Center Building  and we went there, but there was no sign of this Willer Express thing. When we asked security guard, he told us to go to other place (around Mitsui and Sumitomo Building i guess). But when we reached that place the Willer Express Staff told us to go toShinjuku Center Building, errr, okay.

The worst part come after that, when we had to wait outside the building in the heavy rain. We could not wait inside the Shinjuku Center Building because everytime the security guard would tell us to go out! And finally approximately 22.30, WiIller Express staff appeared but not the bus they only gave us a paper telling us the bus number and we were still asked to wait in the heavy rain.

A staff then asked us to gather and lead us to the bus (not asking, but shouting in Japanese) and called us according to the bus number. But that time we even could not reconfirm that he was taking us to the right bus, because he did not want to hear me speaking Japanese slowly and he did not understand English at all. But eventually we got on the bus, the bus was comfortable, but well, the waiting part was not nice at all >.<

We were quite dissatisfied but we supposed that due to the high season condition they had to recruit some other bus. Because the bus that we rode was not the pink Willer Express bus although we booked it at the website. The staff in the waiting place could not speak English, that was very different than the staff at the first waiting place. There was a real waiting place, a real staff that can speak English, and also the bus used was the pink Willer Express Bus.

Anyway, I did not mean to spread bad things about this bus corporation and objectively I also had sent comments about the things happening to us directly to the website 🙂

Anyway, i slept really deep during the bus ride. We arrived at Osaka Station approximately 7 AM and Mbak Allya insisted to find Lawson to search again for Ghibli Studio ticket. Anyway we could not get the ticket (we should have done reservation earlier -.-). After that we went to Yoshinoya to had dinner. Phew, it was so good to eat hot gyudon and miso shiru after our adventure last night 😀 And seems like my sister really loved Yoshinoya 😀 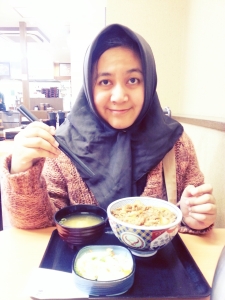 On our way to our hotel, ANA Crowne Plaza Osaka we eventually found little shrine and some sakura. We were just standing there for several minutes to embrace the beauty of the Sakura and after that, of course, taking pictures! :’) My first sakura! 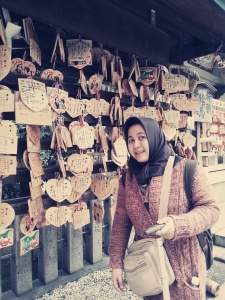 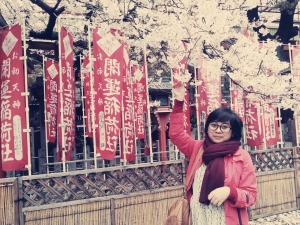 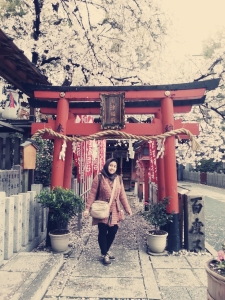 Around 9 AM we arrived at the hotel and we could not check in (of course). So we just dropped our luggage, charge all our gadgets at business center, and ask for tourist information at concierge 😀 The hotel is located in a strategic location about 15 minutes walk from JR Osaka Station and it also provides shuttle bus to the station every 30 minutes from 8.30 to 21.30.

Our first destination was Osaka Castle 大阪城. We reached it from Yodoyabashi Station (10 minutes walking from Crowne Plaza) using Midosuji Line and changing to Chuo Line at Honmachi Station and eventually stopping by at Tanimachi-4-Chome Station.

This iconic place at Osaka built in 1583 by Toyotomi Hideyoshi was an ideal place to do hanami! It was surrounded by sakura trees, really beautiful 😀 We also went inside for the museum (costs 600 Yen for Adult), it was eight stories museum inside. Mainly telling us about the history of Osaka Castle. From the time when it was built, the Battle of The Sekigahara, its fell, until now 😀 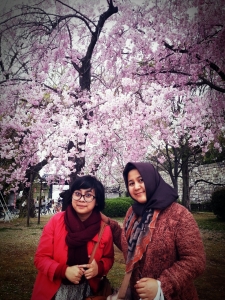 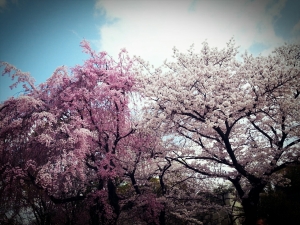 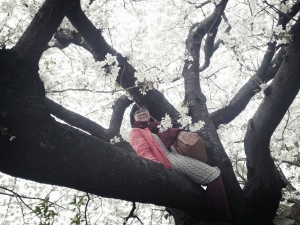 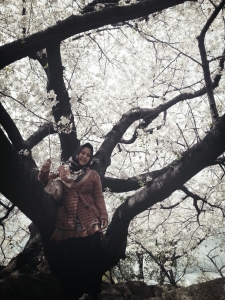 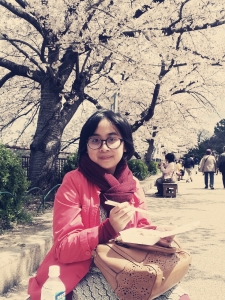 Eating under the Sakura Tree! Hanami :’) 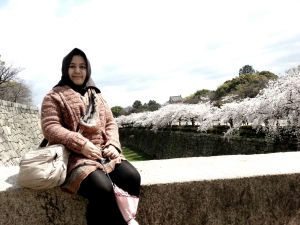 Sakura Trees all over :’) 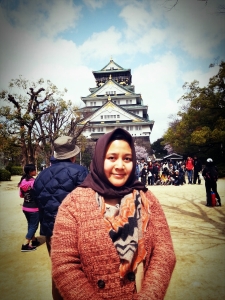 Osaka Castle and my sister 😀 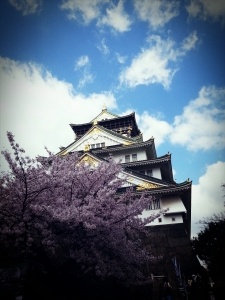 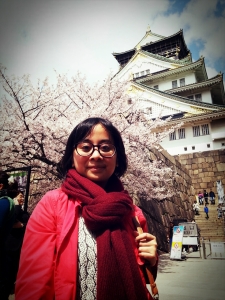 Finally i got to see this castle, not only from Detective Conan 😀

Actually we planned to visit the exhibition of Japanese Ghost at Osaka Museum of History but sadly it was not yet open. We checked in back at the hotel, take a shower, and hurriedly went to Osaka Museum of Housing and Living,because the concierge lady told us that we can wear kimono there.

Osaka Museum of Housing and Living was also not that far from my hotel. The nearest station was Tenjinbashishuji-Roku-Chome, and please noted that this museum was located at 8th of floor of Mitsui Suitomo Bank. Admission fee is 600 Yen, but you can show your student ID and you will get student price for 300 Yen! 😀 This museum has an Osaka in Edo Period city replica, so basically everything was like in Edo Period. We could rent kimono at kimono corner and walk around the city replica and take a loads of photos! But sadly the Kimono Corner was already full and closed so we decided to go back tomorrow morning.

To entertain our heart we decided to have a good dinner, our option fell to an Osaka styled Udon Restaurant near the hotel and it was fantastic! 😀 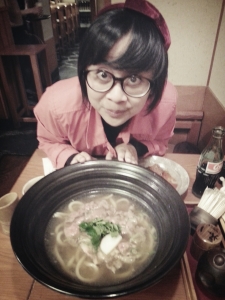 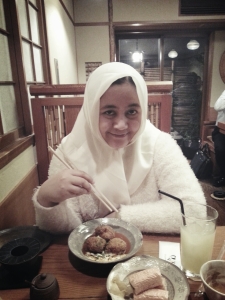 コロッケ and sushi with pink color (it is covered with another rice!)

Our second day at Osaka began with konbini-styled-breakfast at our hotel room, packing up, and we went directly to Osaka Museum of Housing and Living. And when we tried to reach that place again, I lost my PASMO. I was really sad because the PASMO case was Anna-Sui from my father’s bestfriend but anyway, i was lucky that i haven’t renewed my teikiken so I only lost expired teikiken.

But we had fun taking a load of pictures inside the museum! We became two girls from Edo Period, i really love my red kimono, it matched with my red ribbon 😀 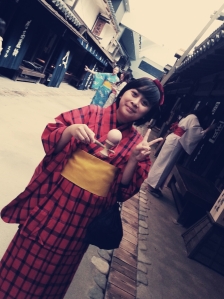 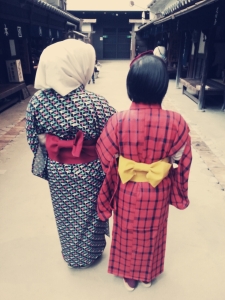 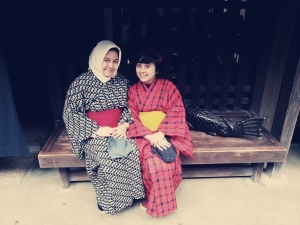 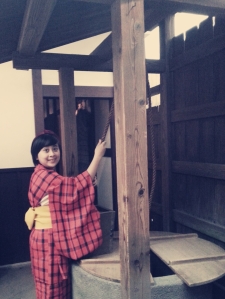 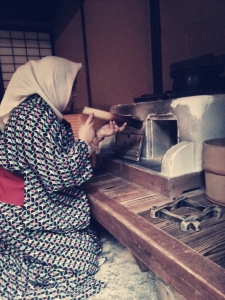 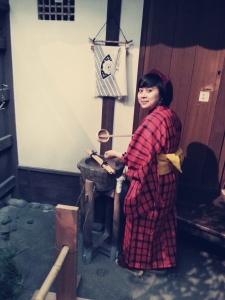 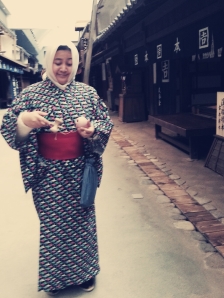 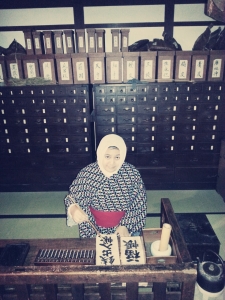 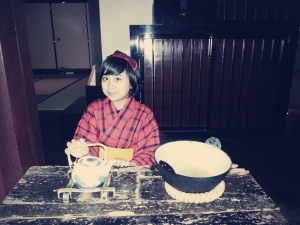 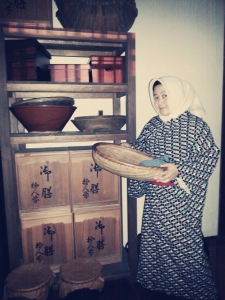 And after that we went to Osaka Station. We will depart to Kyoto! 😀 You can just ride a super-express train (Tokaido Line)  from JR Osaka Station to JR Kyoto Station that depart almost every 30 minutes and it cost only 540 Yen.

And that was all for my first part, please wait for the second part of my journey! Kyoto, Yokohama and a bit more of Tokyo! 🙂 i have to alternate my fun activity (writing blogs) with my school task, LOL XD

One thought on “Spring Holiday : Japan Adventure with my Sister Part 1 <3”